When Honey and I planned our trip to the US for the summer, we decided that we would get married in the nearby state of New Jersey. There will be equal marriage in Scotland soon and we will be able to exchange our Civil Partnership certificate for marriage, but we wanted legal recognition in the US, directly from the US now that it is a possibility.

Equal Marriage in my Home state of Pennsylvania!

Two days after we booked our tickets, the announcement of equal marriage came in Pennsylvania, so we knew what our plans would be.

We got married by a judge five minutes from where I grew up, on the third anniversary of our civil partnership. Both of my parents, all of my sisters and 4/5 of my nieces and nephews and 1/2 of my American brother in laws were present. It was so wonderful to be able to do our final legal step with my family members who have not been able to help us celebrate at either our legal CP signing or the wedding party. It was also exciting to be the judge’s first same-sex couple to marry! 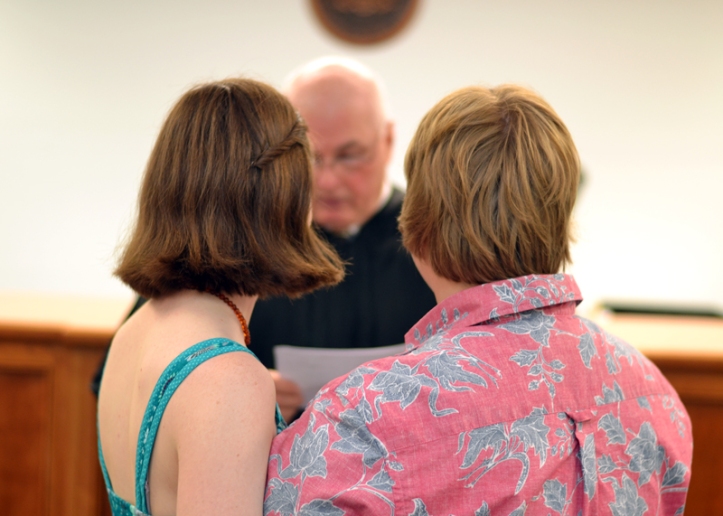 Although we had a civil ceremony in both countries, there were interesting cultural differences. First of all, the registrar in Scotland was not allowed to use any religious words and had to check our vows and music to ensure that there were no vaguely religious references at all. The judge in the US didn’t check that with us and said God several times in the ceremony. We were fine with that but I can imagine it could bother many.

A procedural difference was that the ceremony was complete in Scotland once we and our witnesses had signed the paperwork and in the US only the judge signed the paper. Apparently, our signatures at the time of application were the official record of our confirmation. We even left with an interim certificate that day, which I promptly used to update my name on my American documents.

The final difference that stands out in my mind is one of social space. In Scotland, the registrar stood behind a table (where the papers would be signed) and legally bound us to one another. In the US, there was no physical barrier between us and the judge and he placed his hand on ours as he legally bound us.

It was so interesting, but most of all it was a relief. I am finally, officially, really, truly, my wife’s wife and we are married. For real.

There was an error retrieving images from Instagram. An attempt will be remade in a few minutes.